As Managing Director of Australia’s largest owned family funeral company, Tobin Brothers Funerals, I would like to make the following comments on the widely reported alleged coffin swapping by Harts Family Funerals Rockhampton.

The following article will give you a good overview.
https://au.news.yahoo.com/qld/a/38568856/rockhampton-funeral-home-accused-of-moving-woman-into-pine-box/

I have written in my blogs on numerous occasions that many States of Australia need greater regulations when it comes to our industry. The fact is that you can register your name, call yourself a funeral director and you are on your way in many States of Australia. There are many businesses around Australia, in particular in Victoria, who will register a business name, produce a website, have a mobile telephone number and a station wagon, and then use their home garage to store other people’s loved ones. I am aware of one business that was, and may be still is, using a shipping container as storage for the deceased in their care and the local State Governments allow this to happen. We need greater regulations and we need them now!

Whilst the Australian Funeral Directors Association (AFDA) quite properly and responsibly requires its members to adhere to many of these requirements, they do not go far enough. Many funeral companies in Victoria and around Australia are not members of the AFDA in any event.

At Tobin Brothers we are calling for greater regulations right across the funeral industry in Victoria and Australia.  At Tobin Brothers we believe in total transparency with our client families, so they know where and how their loved one will be cared for, and who will care for them. I invite you to watch the series 'A Day in the Life of...' on YouTube or on our website to gain further insight into Tobin Brothers. 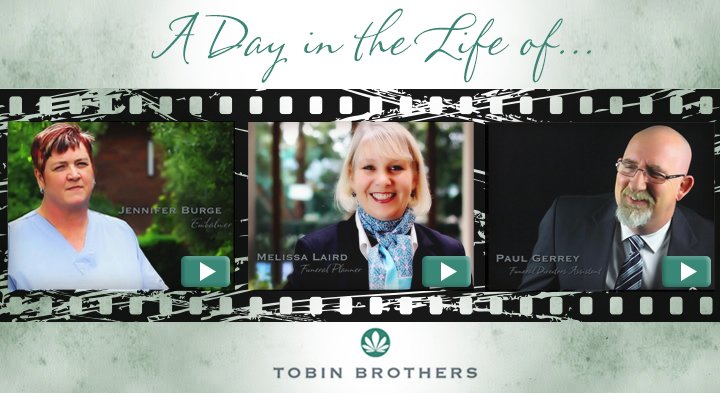 Our pledge to you is that we will act professionally with dignity and respect. Tony Hart”. 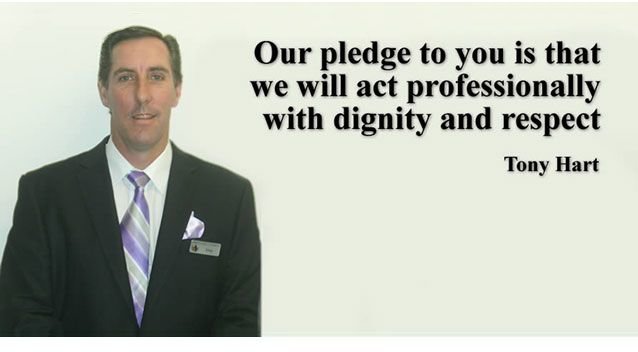 I do not know Tony Hart or anyone from Harts Family Funerals.

All I know about the allegations in relation to coffin swapping is what I have read in the newspaper reports.

I read some reports that suggest that it is a common practice in the industry to swap out coffins prior to cremations. I can categorically say that this is not my understanding or experience of the industry, nor is it, nor would it be, an accepted or condoned practice at Tobin Brothers. Changing a coffin prior to the cremation is something I have never seen in my 31 years as a funeral director working in the State of Victoria, SA, NSW and ACT. My entire career has been with Tobin Brothers, who I consider has the highest standards in the industry in the Nation.

The reports I read appeared to suggest that Harts Family Funerals did not deny that the deceased had been transferred to a particle board coffin but that this had occurred as a result of concerns that the lacquer of the silky oak coffin might crack because the coffin was going to be stored in a refrigerated cool room at the crematorium.

It is for the investigators to determine whether there is any proper basis to this explanation and the investigative process must be allowed to take its course.  The reality at Tobin Brothers is however that a deceased would have been placed in the coffin chosen by the family in a refrigerated cool room 24 hours prior to the funeral service taking place (although this does assume that the funeral director has a refrigerated cool room).  The point is that quality coffins are engineered to withstand storage in cool rooms.

For the avoidance of any doubt, at Tobin Brothers, the coffin which a family selects and pays for is the coffin the deceased is either buried or cremated in.  There is no reason to transfer a deceased person into a different coffin prior to cremation nor would this ever be authorised Tobin Brothers unless the client family for some reason expressly gave its permission for this to occur.

There are many questions that have been asked about the cremation process - what happens?  The reality is there are many myths and misinformation that surround cremation. We at Tobin Brothers are happy to dispel these myths. Tobin Brothers owns its own crematorium – Murray Valley Cremations. We produced a video four years ago showing the community the cremation process to ease concerns and help to answer many of those questions around cremation.

For obvious reasons, Tobin Brothers will not sell a metal coffin to any client family where the deceased is to be cremated.

To view the video go to:
https://youtu.be/OT9b4duY5dc

In June 2017 the University of Sydney produced a report – 'It’s Your Funeral'. I wrote a blog on that on June 13th 2017. Much of the report focused on price being most important factor when deciding upon a funeral for your loved one. I reiterate that I agree that price should be a consideration but it should not be the only consideration because many in the funeral industry, particularly low price funeral companies, will do a funeral for hundreds of dollars less than Tobin Brothers because they need the practice.

You will often hear us say at Tobin Brothers that funerals are too important to leave to anyone. I think the content of this report demonstrates just that.

Transparency is so important in every aspect of funeral care. It starts with the funeral company’s website, their premises, their staff, and their equipment. If you don’t find it on their website, you can be sure it is not going to be at any of the other touch points throughout your funeral experience.

Do your due diligence. Check the Australian Funeral Directors Association website that lists all AFDA members nationwide.

The bottom line is that everyone in the community, in their absolute time of need when a loved one dies, deserves to know that the funeral company that they are engaging is going to care for their loved one and for them as a family with absolute dignity, respect and transparency. The abiding instruction at Tobin Brothers to all our staff at all stages of the funeral process is that the loved ones of our client families are to be treated with the same respect and care and compassion that they would be shown as if they were our own family members.